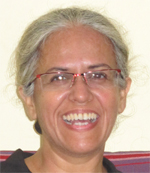 The acquisition of language is a fascinating process. From listening to mother in the cradle, to beginning your babbling in return. From the sense of “I” that develops in relation to the mirror image as different from the ‘(m)other’ and the excitingly painful sense of separate-ness. From the time you realize the delicious use of new words to beginning to understand their ‘root’ and appendages and placement in a grammatically correct structure and then their colloquial usage that enables you to break those very rules. It’s a definition. It’s a relationship, an acculturation. It’s a transaction, a communication, a creation, a symbol. It’s mother- tongue, foreign tongue, the language of domination and subjugation, the dominant language and the vernacular, the scripted language and the one without a script. The lost, the extinct, the borrowed and the eternal. And now, a global language, generally referred to as English.

Is English a singular noun? Or does it refer to the various forms, the permutations and combinations that encapsulate the different Englishes that are known and spoken across various countries today? The efforts made by a community to arrive at and use a derivative of the English language would possibly be euphemistically known as different methodologies to learn English. When the community happens to be a school, these would be described as methodologies to teach English.

We learn English and teach English by ‘doing’ English. We do it badly by repetitive rote learning of the grammar (is there a “the” grammar or an “a” grammar of a language that is accepted within a community as a convention?) We do it well by using LSRW (Listening, speaking, reading, writing) sequentially and even better by doing all four together. We do it using textbooks, grammar rule books, class work books, blackboards, electronic boards, dictionaries, audio tools, video tools, fiction and other books, drama, songs, rhymes, oral use, listening, artwork, written use and reading letters, signs, symbols, words, sentences, paragraphs and essays.

The adequate use of the tongue is an authentication of the individual that enables his or her acceptance into an ethnic group. The loss of the tongue is the loss of a tradition that alienates the individual from the ethnic community. I wonder whether the over-emphasis on mother-tongue could become a parochial way of ensuring that the acculturation is oppressive and totalitarian. The beauty of plural tongues creates a hybrid quality and improves the chances of the child’s usage of a richer set of registers of multiple languages. In other words, a child learning multiple languages inherits many cultural mores.

My father learned English, Farsee, Urdu, Punjabi and Hindi and used all of them with ease. His ease of communication in different tongues shaped his sensibilities and his depth of understanding of different people. This is also seen in the difference between children who have a different mother tongue from the language of instruction in school and are equally at ease with both, when compared with the child using only one language at school and at home who is confronted with another who speaks a different language.

The best methodologies then, of teaching English, take into account the many tongues known as English, as well as their relationship with other languages. Thus knowledge of sociology and anthropology is a requirement of a teacher along with the knowledge of psychology. Teachers create a world in which the child acquires her language, the knowledge of class, community and her role in her home and school, and her own place within a complex universe. This is why, when teachers refer to the language of instruction as superior to the student’s mother tongue, it causes unimaginable anguish in the child and this has severe repercussions on learning itself. Then again, teachers who love etymology and can also appreciate the beauty of say “mumbaiya”, which includes at least 10 languages within its lexicon, have a completely different approach to the teaching of English!

So where do we begin? Obviously with songs and stories in school, as is done in the family. The rich oral tradition of songs around seasons, harvests, marriages, devotion and festivals is a source of language acquisition like no other. The regular use of the same songs over time introduces rules of language and cuts across disciplines to include environment, social sciences and even math. Our songs also introduce the narrative that then develops into a story. Stories for children are laden with value based norms of ‘how to be’ and what is good. It is the single most powerful agent of cultural transmission. Through the Ramayana and Mahabharata to Jataka Tales and tales of Mulla Nasiruddin, Tenali Raman and Birbal, the inspiration to be courageous, clever, honest, humorous is imbued in children and adults alike. The larger the pool from which the teacher draws her stories, the greater the non-chauvinistic enculturation of children into a pluralistic society.

The story is also the best place to include words and phrases that act as discourse markers, creating meaning associations that determine the responses of the listener. These determine, to a great extent, the ability to communicate clearly, create meaning in conversation and enable deeper understanding. Teachers who recognize and explore these discourse markers with enjoyment, ensure that their students develop a respectful ear to language use by diverse people. Think of the child who has read books by authors from across the world and discussed some of them. Contrast this with the child who has only read textbooks, even if the textbooks have chapters that are written by authors from across the world, and you see the difference.

The novel gently opens the child’s world from traditional stories to those that provide different ways of gender stereotyping and challenge the construction of ‘givens’ in the child’s life. Pictures in textbooks and outside textbooks, form an essential component of study that could create insight in students. Students gradually pick up an increasingly sophisticated vocabulary to talk about the contradictions they experience between the known and the new. This is particularly important for teachers to recognize as they tend to bring their own conditioning into the class or find themselves unable to challenge their own norms and allow children to differ and disagree. For instance, we know that textbooks with only images of the mother at home and the father at work can be extremely disconcerting for a child whose mother works for a living and one whose father doesn’t. Teachers’ sensitivity to simple problems such as this and other such unnoticed needs to be thought through so that they don’t bring their unexamined prejudices into the classroom. The same is true of audio visuals in schools that have such technology available within the classroom.

Pictures in texts are just not enough – the colours, textures, shapes and patterns, smells, tastes, sounds, conventions, and protocols in the child’s environment influence the sense of belonging. This requires teachers to understand adequate amounts of anthropology to enable every child in the class to belong. Or even, appreciate the aesthetics of other children elsewhere. The student who has discussed the form of the Japanese haiku but not that of the qawwali or the geet, is absorbing a subliminal hierarchy through the learning of English forms of poetry!

Finally, the hierarchical relationship of the child and teacher enable students to learn protocols of ‘how to speak to whom’, ‘what to say/not ever say’ and ‘when to speak’. When the class is mentally constructed by the teacher as a mob in need of strict control, chances are that individuals making up the class will not be recognized as such. Children learn to negotiate the world according to the norms of the school and the family. The closer they are in agreement with each other, the less likely children are to understand and empathize with different ways of being. The chances that English teachers are more equal than others in the school comes from the unequal esteem with which the language is perceived. Often students going to “south Mumbai” colleges look down at “vernies” who don’t speak English the way they do (or at all).

The challenges of the stereotype confront the teacher, parent and child everyday. “Why am I not a Parsi?”, a young student asked her mother tearfully at age five, on returning home from school one day. On probing it was discovered that it was Parsi New Year and all the Parsi girls at school had been asked to stand up so that they could be greeted! How alone the child must have felt that day, in a Parsi school. She looked up to Parsis for a long time, till she learned that they were just a community, not some halo encircled gods. Meanwhile, her parents approached it differently, by getting her a Navjote dress!

This article was originally written for Teacher Plus magazine, and was first published under the title ‘The Many Paths to Language’ in their June 2012 issue.

The author is the Executive Director of Adhyayan. She can be reached at ‘kavita dot anand at adhyayan dot asia’