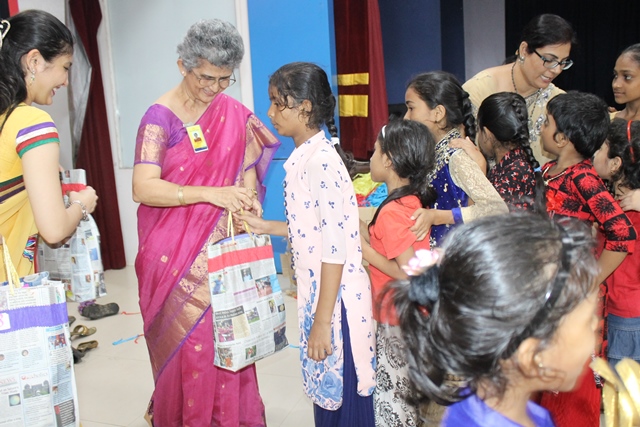 Two years ago, Dr Pramila Kudva became Principal of Pawar Public School. A Principal for many years in highly successful schools, she knew how to ease herself into a school, observing and understanding the established practice and culture. Once she had got a sense of her school, she supported its strengths and worked on its areas of challenge. One of her major contributions in the first year was to streamline the school’s process documentation.

At the end of the first year, reflecting on the school’s progress, the thought crossed her mind that she would like to share what she had done and get some peer validation to assess how the school had benefited. She asked what schools were doing in this area and that was when she heard of Adhyayan.

It wasn’t her decision alone, and Dr Kudva did her background research, checking on Adhyayan’s credentials before she approached her Board. “I asked for the review,” she says, “It may be an unusual thing for a Principal to do, especially since it includes all stakeholders, but I saw that as the strength of the process. And happily, for me, the Board backed me on this ‘unusual’ decision.”

The self-review and peer validation using the Adhyayan Quality Standard took place in June 2016 and the entire school self-review team learned that theirs was a National Gold school, a benchmark that placed them among the best schools in the country. For Dr Kudva it was gratifying because it validated her sense that the school was doing well. The parent, teacher and student representatives were also elated that their school was recognised by a professional body, on a global standard.

Unsurprisingly, for Dr Kudva, it wasn’t enough. She wanted the review to prove that the school was good, but more than that, she wanted to use the review to improve her school further. “It was really nice to have the validation team led by Spokey, because apart from being a true professional with impeccable credentials, he speaks from his heart and his words inspired the school team to aim for an even higher award.”

Dr Kudva says there has been a change in the attitude and approach of the School Self Review and Evaluation (SSRE) team members. “They are eager to meet and plan improvement. They come to our meetings with ideas on what can be done. When I go for a learning walk, I see the sort of display that makes me happy. The review has strengthened the team’s resolve to learn even more about what good looks like and keep getting better.”

Dr Kudva has also been with Adhyayan to support other school reviews. She realises that school leaders often find it difficult to be objective and reflective of their school’s performance. She is, therefore, keen to give her self-review team the practice they need in identifying secure evidence. Her team has already conducted a second self-review six months after the first review.

“This is how they will keep learning. And they are happy to learn, so I am happy!”